Home Neem trees for the future

Neem trees for the future

The neem tree is ideal for revegetating barren landscapes. Its rapid growth, deep root system, and ideal CO² balance make it the “air conditioner” of choice. It halts erosion and creates sufficient resistance to Peru’s recurring El Niño phenomenon. Thanks to its fast-growing biomass and ability to provide stable wind protection, it can quickly regenerate leached soils and turn them into fertile land. 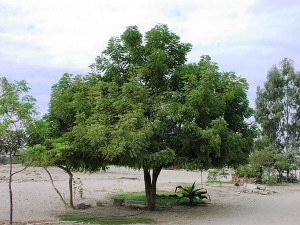 By virtue of its properties, the East Indian neem is praised as being the quintessential tree for solving global problems. This makes it all the more surprising that its spread so far on a grand scale — especially in poverty-stricken areas — was not promoted earlier. In just a short time, the neem tree delivers an enormous biomass made up of all the tree’s parts, which have a high commercial value. Even the presscake left as a residue of oil production, and its leaves, provide high-quality animal feed and can be used as fertiliser.

Why the neem tree?

The neem, Lat. Azadirachta indica, belongs to the mahogany family originating in India, Pakistan and Burma. Thanks to its robust features, it was spread by humans to many parts of the world.

As long as the soil is moderately permeable, its necessary growth conditions are not confined to certain soil structures. Consequently it tolerates both good nutritious soil as well as nutrition-poor sandy soils. 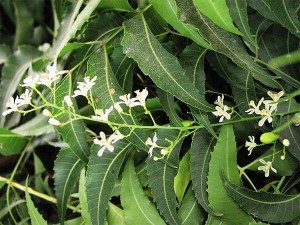 The neem is a very fast-growing tree; in its first year, and under favourable conditions, it is capable  of growing up to four metres (13 ft.). This evergreen reaches an average height of 15 to 20 m (roughly 50 – almost 66 feet); but under special conditions it can reach a height of up to 35 m (115 feet). The neem tree lives up to 200 years.

The neem tree’s strengths are its robustness and drought resistance. The neem sometimes discards its foliage to protect it from parched conditions. It easily survives  in areas with an average rainfall of 400 mm (almost 16 in.) to 1,200 mm (47 in.). If sufficient ground water is present, the tree can survive on even less rainfall.

Its root system consists of a very strong main root that descends vertically in the ground; this root can grow to be twice as long as the tree is tall. The additional root system is not particularly expansive, but contributes a high degree of stability to the soil structure.

The neem is a bisexual plant. It has both male and female flowers, and bears fruit for the first time after about four years; the seeds, however, are capable of germination for only six weeks after that. The neem tree achieves its highest fruit yield after approx. 10 years; one tree may bear more than 50 kg of fruit.

What are the neem tree’s advantages for rural populations?

An integral part of the project will consist of training the population extensively, including how to correctly handle the trees.

Due to the neem tree’s rapid growth, it provides, relatively quickly, sufficient wood for use in all kinds of areas — over the medium term after four to six years. During that time, only parts of the plantations will be used for wood recycling. The other parts must be used for seed production with the resulting benefits.

Neem wood is suitable for the production of charcoal, an indispensable product for preparing meals. Also, all parts of the tree can be used as firewood, depending on how dishes are prepared in the individual households. The wood is extraordinarily suitable for the construction of houses and stables, since, depending on its constituents/chemical makeup, it resists termites and parasites for approximately 40 years. The wood is also suited for use in the shipbuilding industry.

Starting with the first fruit harvest, after approximately four years, the neem oil can be extracted from the fruit. This oil is used in a variety of areas. It can be used in agriculture as a natural pesticide; for combating and preventing insects, roundworms, mites and fungi, as well as in the manufacture of cosmetics and naturopathy. 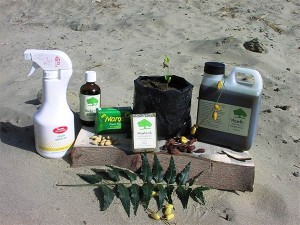 The training for and creation of production facilities for oil production generates additional income. The presscake remaining behind during the oil extraction process makes a good fertilizer. A broth can be cooked from its leaves, which can be used for pest control in animals, thus providing more stable health for the animals.

An Overview of the Multi-Talented Neem Tree:

1. For use in agriculture, industry and trade

Spraying broth onto the plant as a bio-pesticide (at a strength ranging from 0.25-5%); mulching material/fertilizer improves the soil climate (nitrate/nitrogen); lubricant; fuel for lamps and for biodiesel;  protecting animals against ticks, lice and fleas; as an additive in various fields, e.g. animal feed.

Consolidating the soil against erosion and ultimately providing some protection during earthquakes; providing shade/ecosystem; honey; lumber/construction material (the wood is termite-resistant);

2.Using the product in the household

3. Medical and cosmetic use.

4. Neem as a bio-pesticide:

5. Neem as an anti-insect agent: 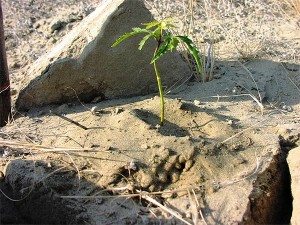 6. In crop protection for:

Neem is effective in protecting food supplies such as various grains, beans, corn/maize, rice and potatoes against insect infestations.

Neem trees grow very quickly and have an attractive green colour. Neem trees bear their first fruits in as early as four to five years.

By virtue of its properties, the Indian neem tree is praised as being the quintessential tree for solving many global problems. This makes it all the more surprising that its spread so far on a grand scale — especially in poverty-stricken areas — was not expedited earlier.

In just a short time, the neem tree delivers an enormous biomass made up of all the tree’s parts, which have a high commercial value. Even the presscake left as a residue of oil production, and the tree’s leaves, provide high-quality animal feed and can be used as fertilizer.

Your donation will help return a bit of quality of life to the Peruvian people.