Home An idea evolves into an association

An idea evolves into an association

The First Neem Tree in Piura 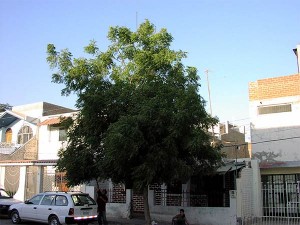 July 16, 2007: In the city of Piura, we discovered a neem tree at the end of its fruit-bearing stage with a few of its last seeds. We were still able to pick about 50 fresh fruit from this tree and find a handful of seeds in the sand under the tree; birds had freed these seeds from the fruit pulp.

The owner of the house told us the approximate age of the tree: eight years. A civil engineer had given it to him as a seedling. He found the tree simply beautiful; it was also said to repel mosquitoes. “Carlos” (that was his name) knew nothing more about this species; he was a little surprised about our efforts to fish the last seeds out of the sand. 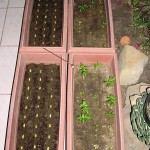 We immediately prepared a few planter boxes for cultivation. That was the start of our first trial plantings and of our research into whether the neem tree could survive, even during an El Niño. That was fundamentally the most important question, since this severe, long-lasting rain must be expected about five times per decade, and the neem tree does not like “wet feet.” Although we found no answer to this question, neither in books about the neem tree nor on the Internet, we nonetheless launched our project by carrying out specific experimental plantings in different soil structures and using different water qualities.

The acid test carried out on the Pacific coast 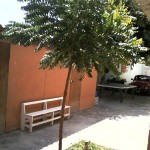 On January 13, 2008, we planted a few neem trees in the garden of a small hostel located right on the beach of Colan. This was necessary to ascertain whether the neem tree can tolerate saline soils. The trial was extremely successful and convinced the people living in these areas, which are, unfortunately, hardly visited by tourists. In the first year, the trees grew to almost 3 meters high, and have proved to be extremely tolerant of salt.

With the neem trees, the tourist environment can now be developed into a more attractive and lively region. The trees also ward off the mosquitoes which are dreaded  since they carry malaria and dengue fever. They trees also provide protection against erosion.

Visit by a professor together with postgraduate students 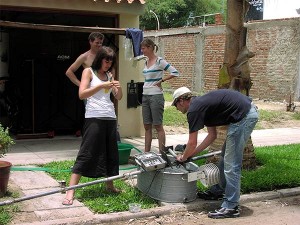 On February 27, 2008, Dr. Michael Richter, Ph.D., a professor at the Institute of Geography of the University of Erlangen-Nuremberg, visited us for the second time. Every year at this time, a group of post-graduate students study the El-Niño phenomenon. Several research stations, which permanently provide data, have been established in the Piura region, the Sechura Desert and Loja (Ecuador). We discussed our ideas, concerns and disagreements regarding El-Niño.

Since the neem tree had to date not been established here, there is no experience to draw on, nor any comparison data, either. That threw a wet blanket on our euphoria. We wanted to be absolutely sure, and for the time being, we are continuing our research. 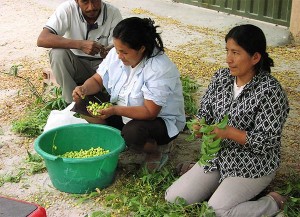 During the period of April 10, 2009 to May 30, 2009, we fully harvested the few neem trees and stored the seeds. We had witnessed so much poverty, which had affected and convinced us to simply try. The seeds, now ready, will germinate in approximately 6-8 weeks. Otherwise, we would have to wait until next year.

Conversation in the Town Hall with the Lady Mayor

On April 18, 2009, we met the mayor, Monica Zapata. The project was approved and we were promised all government office support, all of which inspired us greatly.

Our idea is to plant one million trees each year, so we are searching for land. We want to name this year the trial year; and we are starting with 25,000 plant containers distributed over approx. 1,500 square metres (almost one square mile). The Mayor wants to help with the process and address urban areas.

Neem trees and seeds for Mancora on the Pacific 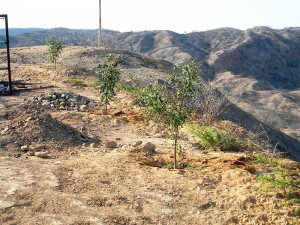 Starting April 20, 2009, neem trees were planted all around a hotel located on a hill. Mancora is a tourist destination situated on the coast. The foundations of many buildings stand on a mixture of coarse gravel, sand and mud, for example the Kon Tiki owned by Patricia, a Peruvian, and Jürg Thommen, from Switzerland. During heavy rains, this mixture becomes unstable. The trees have taken root and are growing rapidly, much to the owner’s delight. Jürg and his wife have some land on which they are now cultivating neem trees to distribute in the area.

Angela Saifee from Austria resides on the same hill. She operates a small vegetarian restaurant in Máncora and supports our project. The jointly-cultivated neem trees will be planted in the area.

At this point, we would like to thank them for their involvement. 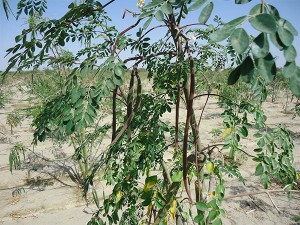 April 26, 2009. We have bought moringa seeds and are now testing the first ones to see whether this tree is suitable for Peru. It is native to the Himalayan region in northwest India, and, in addition to the neem tree, it should provide a powerful nutritional supplement for malnourished people and animals. Its protein, vitamin and mineral contents are very high, comparable to spirulina algae. The powder from its crushed seeds is suitable for treating drinking water.

The moringa tree grows very fast, and bears fruit all year round. In December 2009, our tree bore its first fruit containing an abundant number of seeds which we earmarked for additional propagation. 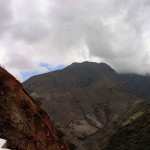 On May 15, 2009, 2,000 neem seeds are going to be delivered to La Manga, located an hour’s drive from the city of Jaen / Sierra. The trees will be used at that altitude for erosion protection. They are also being tested by small-scale farmers for use in coffee cultivation.

June 16 and 17, 2009 We have meanwhile been keeping our eyes open and searching the whole urban area of Piura and its surroundings for more neem trees. Unfortunately, without success. It occurred to us to drive back one more time to the “first neem tree belonging to the engineer,” hoping to meet “Carlos.” When we asked where the “engineer” lived, people willingly gave us directions, and we went on our way immediately. 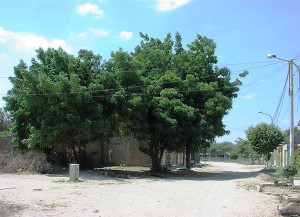 We very quickly found the house located in a dusty residential area on the outskirts of the city of Piura. The two gigantic neem trees, which provided the area’s only greenery, were unmistakable. We were greeted by the lady of the house and her two sons. We explained our concerns and ideas on distributing neem trees throughout the region.

Her feelings during the first few minutes of our meeting were a strange mixture of joy that we had showed up and a withdrawn sadness. The father’s portrait hung above the sofa we were sitting on. Her husband, civil engineer Victor Raul Zapata, had unfortunately died, relatively young, just five months ago. Mrs. Zapata granted us full access to both neem trees at her doorstep. The couple had been forced to cut down a third tree because that one had been planted too close to the house. She gave us the massive trunk to use in our first attempts to process the wood. As we were leaving, the following most critical question was answered: 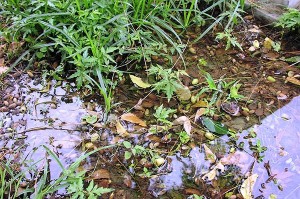 Both neem trees had been standing in water for weeks, and from the fallen seeds, countless small seedlings had sprouted in the large puddle. When there is an El Niño, the neem tree must be able to tolerate a substantial amount of water. The city was supposed to have repaired a leak in the water pipe. However, due to the empty city coffers, it took the workers longer to show up. How lucky for us! 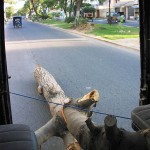 puddle, and to plant them in planter boxes. Then, in a spectacular undertaking on August 1, 2009, we “dragged” the tree trunk right through Piura.

On August 2, 2009, we gained our first experience with this wonderful wood. It is a light-colored, relatively lightweight wood. It is very hard, but good to work with. After our visit to the Zapata family and our successful experimental plantings, we decided to give the project a name: Plan Verde. 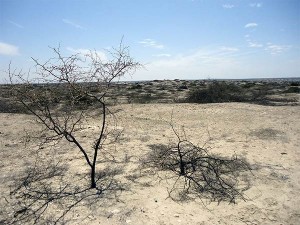 July 2, 2009. The pieces of land offered by the city were either too far away or had no water. The development costs would have been too high. The seeds’ ability to germinate is decreasing. Generally, neem seeds can germinate about six weeks after the harvest. We extracted one portion of them from the fruit pulp and stored them, after they underwent surface drying, in the refrigerator. However, most of the approximately 45,000 seeds were saved within the whole fruit and were distributed throughout our circle of friends to various refrigerators. 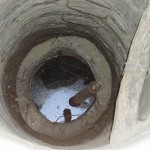 July 13 – 31, 2009. Oscar Izquierdo has placed his land at our disposal. It consists of an old hacienda (a large estate in Latin America) with two wells which have water. We are preparing 1,200 m2  area (1,312 square yards) and setting up protection against free-ranging animals. The water is salty, but adequate. Unfortunately, it turned out later that the well water’s re-supply was insufficient and therefore the required flow rate was too low. The quality of the first collection of seeds is decreasing. Time is running out. 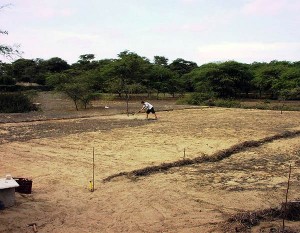 July 23, 2009 We had a conversation with Enrique Pizarro. It gave us new hope for finding a suitable piece of land.

July 28, 2009 We visited his land which possibly represents new land for us to use. Water is available in sufficient quantities. Our test of the soil quality is positive.

July 29, 2008 At a low price, Enrique Pizarro provides us with a piece of land measuring approx. one hectare (2½ acres), including shared water at low cost.

Preparing the founding of the association

August 1, 2009 Thanks to being provided with land, we can start creating Plan Verde. 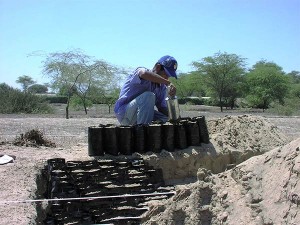 August 10, 2009 A Peru-based German lawyer takes over creating the wording of the charter and establishing the protocols for the Plan Verde Society.

August 16, 2009 Excavation work is completed. The 25,000 almacigos are prepared and ready. They must be sufficiently watered over the next two days.

April 18, 2009 We start sowing in the hope that the seeds, which had meanwhile been stored, can still germinate.

April 20, 2009 We have sown around 1,000 neem seeds bought from Brazil and another roughly 1,000 from a Hindu from India. We want to compare these neem trees with those in Piura, and are curious to see whether they are the same type. Up to now, it looks as if there’s no difference. The seeds, foliage, stem, and roots are identical.

September 3, 2009 The sowing has been completed. The anxious waiting begins.

September 10, 2009 Our fear that the seed was too old is escalating. Instances of germinated seeds are few and far between. The quality of the seeds is poor due to the fact that the seeds were collected at different times, i.e. in April, May and June, and were stored in the refrigerator.

September 24, 2009 We begin the second sowing using the seeds from June.

September 28, 2009 The Society’s constitution and the founding protocol have been submitted to the District Court in Hanover, Germany.

October 5, 2009 We begin creating the logo and constructing the Web page.

November 16, 2009 We have recorded small germination successes. Of the approximately 17,800 newly-prepared bagged plants, the success rate was roughly 20% due to the poor quality of the seeds.

December 21, 2009 As per Paragraphs 51 ff. of the German Fiscal Code (AO), the Tax Office in Nienburg/Weser, Germany, has granted non-profit status to the Plan Verde Society. 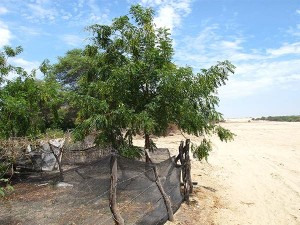 December 24, 2009 – April 2010 The neem plants have developed well and, being irrigated 2-3 times per week, continue to grow today. The trees should grow roughly 2 to almost 3 feet high, so that when they are planted out and in place, they can’t be missed.

To date, and with the donations provided, we have distributed  more than 250,000 neem trees in the Piura region and trained people.  Unfortunately, we have also had some setbacks. Some neem trees were forgotten or destroyed by being eaten by livestock; some didn’t make it due to unwittingly playing children.

We will continue working to achieve the goal of the Plan Verde Society.