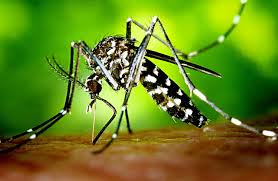 Dengue fever is a viral infection. It exists in more than 100 tropical and subtropical countries.

Dengue fever occurs both sporadically but also in epidemics. The regions most affected are Southeast Asia, the Indian subcontinent, the Pacific, the Caribbean, tropical Africa, and Central and South America. The risk of infection climbs during the rainy season. In the tropics, Dengue fever is a significant cause of sickness and death among children.

The time between infection and the appearance of symptoms (incubation period) is between three and 14 days. Although Dengue fever belongs to the hemorrhagic fevers (fever with a tendency to bleed) just like Ebola and Lassa fever, it usually runs its course without causing bleeding.

Worldwide, the number of cases is estimated to be approximately 30 – 60 million annually. Several hundred thousand cases appear in the form of the severe, hemorrhagic (bleeding) type, or the so-called Dengue Toxic Shock Syndrome. In these cases, mortality ranges between six and 30%. It chiefly affects children under 15.

Travellers are increasingly carrying Dengue fever into non-tropical regions as well. This is why this infectious disease is appearing more and more frequently in, for example, Germany.

The virus causing Dengue fever, the Dengue virus, is included in the category of so-called Flavi viruses. Four different types of Dengue virus exist. While a full-blown case protects against reinfection by exactly the same type of virus, it does not prevent reinfection by one of the other three Dengue viruses.

Dengue fever is transmitted among humans as the result of a bite from various different types of Aedes mosquitoes, primarily Aedes egypti (yellow fever mosquito) or Aedes albopictus (tiger mosquito). Although the mosquitoes are active during the day, they bite chiefly at dusk.

In addition, a temporary skin rash (exanthema) can appear. After a short time the fever subsides, but after one to two days it recurs again. In this phase of the disease, the virus can be detected in blood using special methods. It often takes weeks before the afflicted person is once again free of symptoms.