Malaria is an infectious disease caused by single-celled organisms (plasmodia). They are transmitted via a particular type of mosquito, the Anopheles. There are four different malaria parasites. 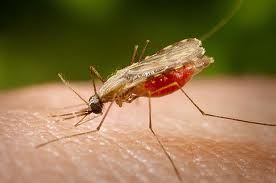 Malaria is a tropical disease and one of world’s most significant infectious diseases. It occurs endemically in approximately 100 countries. About 40% of the world’s population lives in malaria regions. According to estimates by the World Health Organization (WHO), about 500 million people worldwide fall ill annually. Up to 2.7 million people, half of which are children under five, die from this infection.

Through increased travel, tourists are increasingly suffering from malaria, especially from the dangerous malaria tropica (70%). Approximately 12,000 cases are expected in Europe annually. In 2006, 568 cases of malaria were reported to Germany’s Robert Koch Institute. The majority of the patients had previously stayed in endemic regions in Africa.

There are different forms of malaria which run their course differently. The most dangerous type is malaria tropica.

The anopheles mosquito transmits the pathogen (plasmodium) when biting people. The risk of infection in a malaria region is all the greater the more local mosquitoes carry plasmodia and the more frequently they bite people. It is impossible for this infection to be spread from one person to another.

The time between infection and the symptoms of malaria appearing (incubation period) for plasmodia falciparum is seven to 15 days, for plasmodia vivax and plasmodia ovale 12 to 18 days, and for plasmodia malariae 18 to 40 days.

These bouts of fever are very stressful for the human organism. They can be especially dangerous for children, the elderly and the chronically ill. There are different types of malaria diseases which run their course differently. The most dangerous type is Malaria tropica.

How to recognize malaria

Following exposure, malaria may break out after just a short time, but even up to a year later. In the early stages, malaria is easy to confuse with other infections such as a cold (headache, fever, fatigue, rapid pulse, muscle and joint pain) or gastrointestinal disorders (nausea, vomiting, and diarrhea).

Therefore, it is important to see a doctor when there is the slightest suspicion of malaria. Should the disease be diagnosed and treated too late, it can be life-threatening. Therefore, within one year after the patient has visited a malaria region, any unexplained illness should be diagnosed as malaria unless there is evidence to the contrary.

The causative agent of the dangerous malaria tropica, the plasmodium falciparum, is already immune (resistant) to many drugs because in the past, the drugs were used too often for preventive reasons. So that this resistance does not spread further, anti-malarial drugs are used more judiciously today than in the past.